One Fail After Another


Yep, it was definitely one of those days.  It didn't start bad,...but when I began to make the Sunday Soup, things took a turn.  Can I veer off into a rant? Of course I can.

A couple of months ago, we had our kitchen knives sharpened.  They were overdue and we found the most miserable old man who would do it for us.  We had 5 knives to be done.  When we got them back, I noticed how awesomely sharp they were.  Oddly enough though, my cutting board seemed to have warped because my everyday knife wasn't cutting right.

Yeah, I should have put 2 and 2 together, but I didn't until this week when I took a really good look at that knife.  It was butchered (pun intended).  The cantankerous old fart had changed the shape of the blade in what could only have been an accident and now my beloved knife wasn't cutting right.

Insert many, many tears here.  I have another knife that is similar so I thought I could switch over to it while I decided what to do with the sad knife.  So this morning I was cutting onion to put in the turkey soup (mmmmm), and I sliced my thumb.  I'm totally blaming it on the crusty man.  He ruined my knife and now I had cut my thumb. 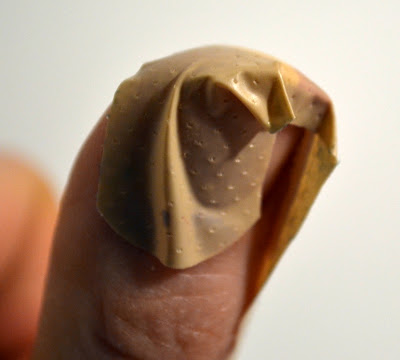 So that was where it started.  I also burnt my wrist making that same stupid soup.

Whew,...time to get out of the kitchen and move on to safer things.

I really wanted to make a crochet hook roll so that I could keep all of my hooks in one place.  No worries.  There was this great tutorial on Craft Leftovers.  It was an adorable clutch.  Sounded perfect and look how cute.

For starters, I had a loose stitch.  Mysteriously.  I tightened up the tension but that didn't help.  It wasn't until I had sewn the entire bias tape and front piecing that I realized I had put the spool of thread on wrong.  Yeah.  No blaming a stupid machine.  I was clearly the stupid one. 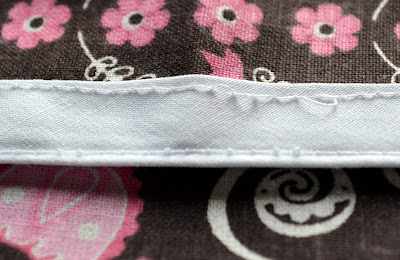 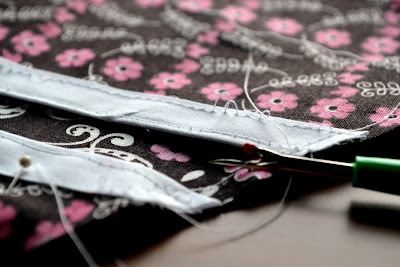 Okay, okay,...no worries, just carry on.  I made several attempts to get everything sewn, but at last I had the front piece completed.  I slipped my crochet hook in to make sure it fit.

Grrrrr.  Insert many, many curse words here.  (did I say many)

Nope the hook didn't fit.  The crochet hook roll that I was halfway through, was useless.  (That hook is supposed to be able to fit inside of the top pocket so it doesn't fall out).  The fabric was so cute too.  How utterly heartbreaking. 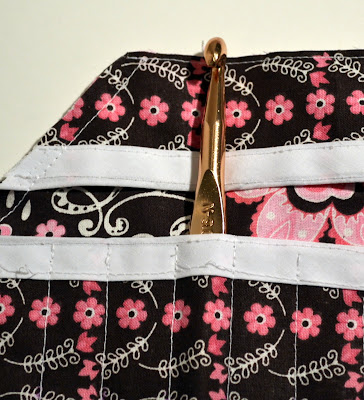 As if that wasn't bad enough, I decided to be smart (always a bad thing) and do two of these hook rolls at one time, so now I have cut out and therefore wasted TWICE as much fabric. Great.

Also, while I was wasting my time NOT making a crochet hook roll, I lost track of time and missed the puck drop for our 3 o'clock hockey game.  Double grrrrrr.  (And then, for some reason, the broadcast stopped right at the most exciting, game-winning moment of the game for no discernable reason).

So this is what I missed.  Okay, a bit dramatic.  I still got to see my beloved Bruins, just missed 5 minutes of the first period, but still.

So,...yep,...a total fail of a day.  Thanks for listening because this little rant has me feeling a little bit better about the whole day.  Better enough to give that crochet hook roll another try tomorrow.

Come on back, because I will definitely conquer this beast and show you how I did it.  Any supportive thoughts are greatly appreciated.  :)

Oh my goodness! What a terrible day, indeed! Hope it's all sorted out soon. (I wouldn't DREAM of giving you advice on sewing, crafting or cooking, as I'm bad at all 3!)

So glad to have found you through Ann of Sutton Place!! Sorry you had such a frustrating day! Hoping today is much better. blessings ~ Tanna

I'm so sorry to giggle, but it makes me feel better to know someone else has those days like I do!

Oh dear, was I contagious?? I have had a lot of fails and curse words lately too!!

Just know it happens to all of us... have a bottle of wine, laugh it off, and try again. :)

Oh Terry I am so sorry! I hate days like that. They happen pretty often around here. I really dislike unpicking things but have 4 seam rippers because I constantly have to unpick when I sew. I hope today goes better than yesterday. You are good to try again. I tend to give up.:)

I hate those days where I wish I would have just stayed in bed. Hope today goes better! :)

Oh Terry!!! I have those days from time to time, oh how I hate them! Hope today is much much better!...and that your thumb heals quickly!

Last Christmas Lover Boy bought me a "Chef's Choice Diamond Hone Sharpener 4633" from Bed Bath & Beyond (don't know if you have that store in Canada...but at least online!!) It has an Asian, Euro/Amer, and Polishing & Serrated sharpeners...I LOVE IT!!! I can do all of my knives myself at home whenever I want to!! I don't think it cost that much either. Just a suggestion! :-)

Argh, fail days! D: I hope you don't get anymore days like that!

Awww....poor girl! I hate getting cut. And especially cutting onions...it's like adding insult to injury.
So, save you poor unusable crochet rolls and use them for something else. Maybe super long blush brushes? Or paint brushes? Or forks? You roll up forks, right? I heard that it's a new trend to roll up forks. ;)

Oh, you KNOW I'm feelin' your sewing pain! The bloody stumps are pretty common in my house too. Although, I never quite know what I did to myself to inflict the injury. Oh, and I DO roll up forks actually. lol The silver ones that never get used anyway.

What a day! Sounds like a Monday to me...sometimes they are the longest dang days. Get some rest and start fresh tomorrow. Can't wait to see your hook thingy. :o)

I feel your pain about the poor work on your knife. A local kitchen/restaurant supply store had free knife sharpening - one knife for each non-perishable food donation to the food bank. I had 6 or 8 donations for 3 knives. When I got them back I was told that I should replace my serrated knife because there was a piece missing in the handle. Of course not! It was still usable and I did not notice it while chopping. When I used my chopping knife the next time I found it had a nick in the blade. I still use it but it bothers me. Same as you I thought I was dealing with a professional!
Can you take it back to him? Even if it has been a while and even if he won't help, you might feel better. Also if you have a 'Better Business Bureau' or something similar, you should call and make a complaint. Where I live, even if the business is not registered they still record the complaint.
I know you needed to rant - and I am fine with that, need it myself sometimes - and weren't asking for advice ... I am giving it any way. ;)