Do you have those days where everything you do it absolutely not sexy?  That was my Tuesday.  I accomplished a lot, never stopped moving, none of it was sexy.

First, I cleaned.  Ugh.  No need for a photo there.  We all know what cleaning looks like.

Then off to do groceries.  I guess everyone knows what that looks like too so how about a really bad picture that isn't necessary?  Here ya go.

I started at No Frills and wanted to go to the Bibles for Missions store and Sobey's after that.  I couldn't do it.  I had to pee so badly in No Frills that I knew I could only do one more thing (if that).  So I had to choose.  Hubbie wanted a watermelon. The watermelons at No Frills looked terrible, Sobey's it was. (I made it home in case anyone thought this was going to be a much more interesting tale than it actually is).

Next was making dog food.  I threw 12 chicken legs (back attached) into the pressure cooker with celery and let it go for 3 hours.  Afterward, I mashed up all the softened bones with a potato masher.  Yummy.  Alongside, I added the freezer stash of veggies with broth into a pot and cooked it. Later, I added oats to this pot.  Our boy, Pete, had severe hot spots on his back feet that have entirely disappeared since I switched him from canned dog food to homemade stew.  It's a bit of a pain to do, but so worth it for our boy.  Look at that face - wouldn't you cook for him too?  :) 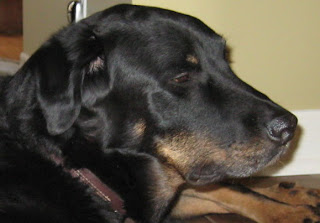 Next up was patching walls.  Super ugh.  Really?  Ewwww.  Okay, okay.  But I am not hanging or rehanging anything.  Yeah, I guess that's a good point.  The bathroom pictures have been sitting there for 8 weeks now just waiting to be put up.  Okay, but only the pictures in the bathroom. 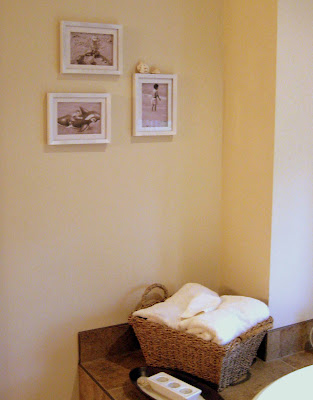 And what about the living room wall?  Okay, I'll do the metal art in the living room too.  I mean we DO see it everyday and it's too low and there are the previous anchor holes still visible.  Okay.  Okay.

Okay, good point, I'll finally hang the jewelry board that I made on April 27th that is sitting beside the dresser, gathering dust and hiding my jewelry. 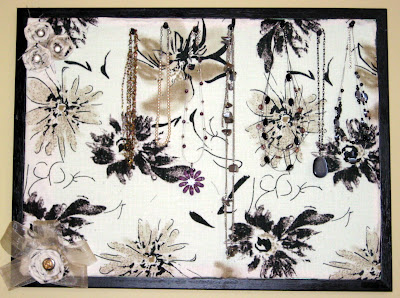 Okay, but that's it.  And yes, these conversations were all in my head, and involved only me.  :)

Well that WAS it for hanging things and wall repairs, but there was still laundry to do and wiping bullfrog slime off of the laundry room wall.  I didn't take any photos of that as I was moving pretty quickly to capture that bullfrog and get him the heck out of our house before he found the perfect hiding spot and then died in some cubby where we could smell him but not reach him (one of my biggest fears). Our cats are such fabulous hunters that we have a Cool Whip container, complete with little air holes, at the ready for all of the treats that they bring in to us - mostly still alive.

Of course there were still meals to prepare and I don't have to go on about what else.  You know what else goes on in a typical house day:  a bunch of stuff that is completely not sexy.  At the end of it though, I felt great.  I felt like a woman who gets things done.  So satisfying.  And if anyone wants to stop over for tea I know that the house is clean, there are no drywall holes, everything is hung, the dogs are fed, laundry is done, and there is no bullfrog slime on the walls (though that can often be a small window).  Feels great.  Maybe sexy is over-rated.

I love it- a woman on a mission. That is one heck of an accomplished list! Can you spare me some of your energy!

Terry you certainly can make grocery store shopping sexy, just go to produce and stick some oranges down your shirt! BAM instant sex appeal and just see how many looks you get. Hope all is well.

This was hilarious. And not just because it completely describes my life. :o)

P.S. Pete is the cutest thing EVER!