I keep trying to start this post, typing a few words and then stopping to moan.  I have to say that after just typing that, it sounds a little,...let's just say creepy.  But it's not.  Trust me.

I am eating a version of Mindy's Thai Chicken Wraps and they are soooo good that I keep having to stop, roll my eyes back into my head, drool a little bit, and moan.  (see, not creepy at all)

I had to change them up a bit because of what was laying around the house.  We had leftover grilled chicken from last night, which is what stirred up using this recipe in the first place, but no tortillas.  I subbed in rice paper which worked great.  Have you ever tried rice paper? They comes dried, stiff, in a stack of a bunch of discs.  I think I found them in the international section of the grocery store. 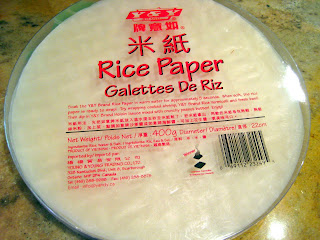 You have to soften them in hot water.  I put the hot water in a pie plate and then submersed the rice paper for about 10 seconds. 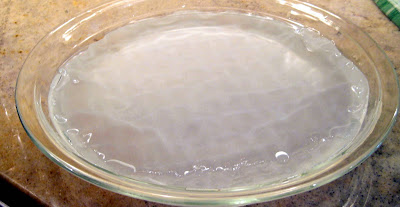 Then pull them out carefully (they can tear easily) and lay them on a tea towel to dry a bit. 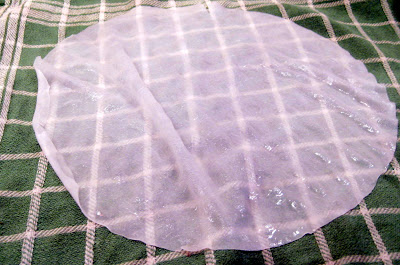 In the meantime, I made the sauce exactly as the recipe stated (which was the absolute best part of this awesome wrap/roll) and grated up some veggies.  I used the leftover chicken, cucumber, carrot, green onion, and cilantro.  I remembered the pineapple that was in the fridge too late, but that would have been a great addition.

I spread out some of the sauce, piled the chicken and veggies on top, and then rolled it up.  You want to start by folding over both sides first, then give a firm grip to the roll (but not overly firm) and then, uh, roll.  :) 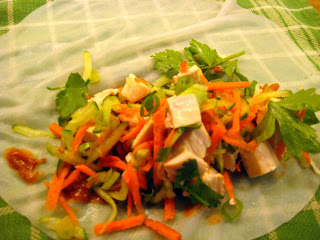 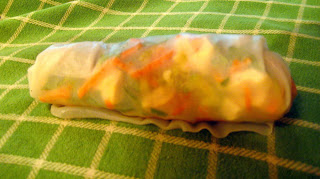 See the extra chicken and veggies on the side of this plate?  They didn't fit into the spring rolls and I'd already counted them as weight watchers points for my lunch so I was darn well eating them.  I dipped the wrap/rolls in a bit of soy sauce but they were also fabulous on their own.  Many, many thanks to Mindy.  Mmmmmm. 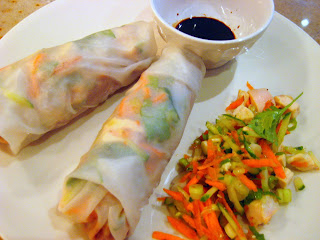 I LOOOOOVE rice paper wraps!!! Salad rolls are one of my faves and since I don't do shrimp, the chicken is such a good idea!!! My fave ingredient to put in them is bean sprouts. I could eat a pound of them. This looks delicious. Even at 8:00 in the morning with my coffee. :o)

Thank you so much for posting our Mountain of Giveaway button to your blog. I have met and learned so much through blogging and now I can't wait to try this recipe!!! Thanks again!

Wow! Fantastic!
Thanks for sharing, I truly enjoyed the visit!