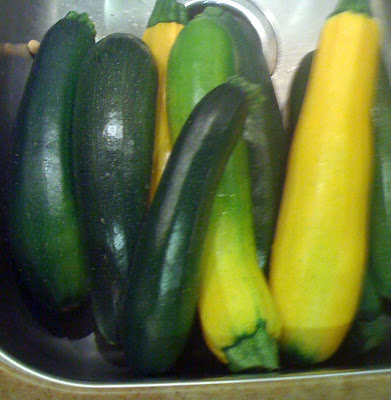 So I went looking for a nice zucchini recipe to have for supper, and I found zucchini fritters at Cinnamon Spice and Everything Nice.

Start by grating the zucchini, salting, and letting sit for 10 minutes in a colander. 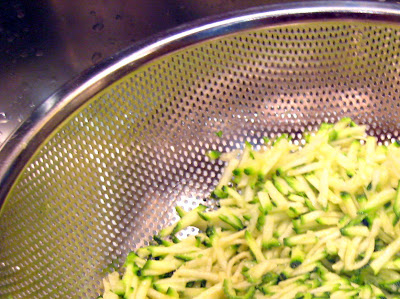 Squeeze out the water and add the rest of the ingredients.  Make into patties (I only got 6, she seemed to get 14).  Cook in a layer of oil until crispy on the outside. 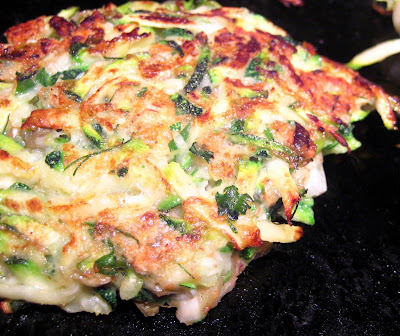 Now hers did turn out nicer-looking, but mine were tasty all the same.  I did add capers and lemon zest which really boosted the flavour.  I would definitely make these again which is good because the zucchini in the garden has just started to overthrow the world. 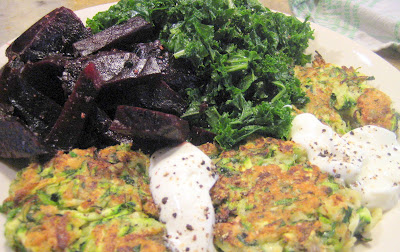 And that is massaged kale next to those fritters.  Yes it is.  I almost did a post on that, but I think I've probably had enough greens info for everyone's liking.

The roasted beets were just tossed with an orange juice/balsamic vinegar combo and lots of black pepper.  Yummy.

To balance out the red/green combos, how about another red?  I almost feel bad mentioning this because I know a certain Mindy someone who is preggers and this will hurt a bit, but she's a trooper so I'll mention, the second red is a Kacaba cabernet/syrah and it is heavenly.  Has anyone tried any Niagara Region wines? (Ontario, Canada I mean)  I'm curious as to whether they really get offered any place but locally.

If you do get a chance to pick up any of the Kacaba wines, do it.  They are the best wines I've tasted in a long time:  peppery and smooth.  Mmmmmm.  :)

I'm gonna have to write the name of that bottle down. Ya know, for future reference.

I didn't plant any this year because of lack of space. They tend to take over. :o( So I'll live vicariously through your mouth. Clearly I didn't mean that to sound as dirty as it did.

Zucchini is our favorite!! We eat it almost every night in the summer! I'm going to have to try the fritters. My mom used to make zucchini cookies and they sound gross, but were delicious! I need to look for the recipe.

Looks Yummy!!! All I ever do with my zucchini is make zucchini bread. It is pretty good too. I think I might need to branch out!