I'm posting this recipe after the thai wrap lunch recipe from yesterday, but this is the one that in reality came first, supplying the leftover chicken for the wrap.

After cooking up that big batch of chicken for the boys last week, I was feeling like a bit of chicken for us.  That, and the appeal of the easy clean-up barbecue, or actually should I say grill (it's a propane grill).  My American friend mentioned to me that there is a big distinction between grilling and barbecue based on the use of charcoal or not.  I think Canadians tend to call it all barbecuing - briquets or not - whereas Americans differentiate passionately.  Maybe we're more discerning about the beer that goes with it? :)

Either way, I butterflied a whole chicken.  Have you ever done this? Soooooo easy and cuts the cooking time considerably.  Also, if you're like me and have a deadly fear of too pink chicken, this method makes it much less likely.  All I did was cut out the backbone with a scissors/knife combo and then break the breastbone so that the chicken would lay more or less flat.  Seasoned with a bit of olive oil, rosemary (that I stuffed under the skin), salt and pepper. 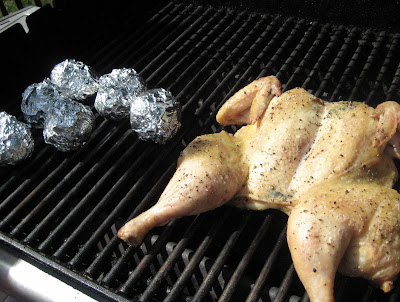 First I preheated the grill on high for about 10 minutes, then turned off the front two burners and put the chicken, skin side up (as shown) for 45 minutes.  Then I turned those burners back on to low, flipped the bird over and finished up for another 15 minutes or so to crisp up the skin. 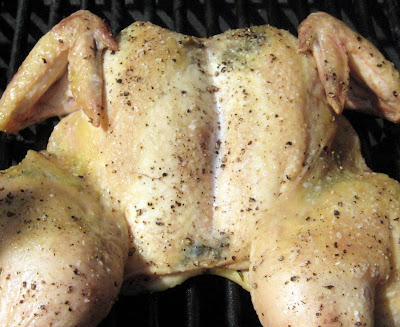 Alongside I put some whole potatoes in tin foil with a dab of oil, kosher salt, pepper, and sprigs of rosemary. I kept those off of the direct heat and they stayed in there for the full hour.  I also wrapped up a garlic bulb that I slathered on the potatoes later (fewer calories than butter or sour cream but awesome flavour still). 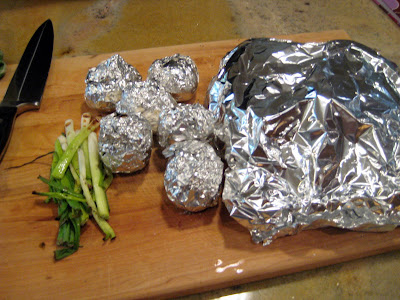 Do you rest your meat? I always do even though there are toes tapping in anticipation in the kitchen.  I find the juiciness factor makes it worth it.  Here is the tin-foiled bird resting beside those potatoes (which are like fireballs when you open the tinfoil).  I threw some green onions on the grill as well.  I love, love, love grilled green onions. 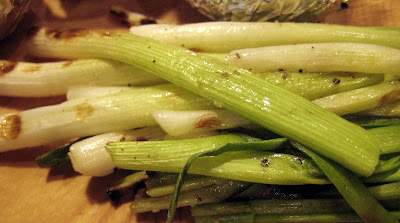 And cleanup amounted to scraping the grill (not the barbecue, lol) and washing that cutting board.  Easy peasy.

We did this last year on the grill. I used a recipe that called for brining the chicken overnight. It was seriously the moistest chicken I've ever eaten in my life.

I have never done this but have seen it on Food Network. You rank right up there with Bobby Flay! I have sort of a phobia about cutting chicken bones. Not sure why...I have never cut a whole chicken up in my life. I buy the pieces or boneless breasts. Call me crazy but I can't help it! Looks delicious though. :o)

Never done this, but does sound really good. I have a virtual phobia about food poisoning after a serious bout last year, so no it's not just you! I don't even like really low lighting in a restaurant - I want to be able to see my food! Grilled green onions are intriguing too - are they what we'd call spring onions?