I know you crafty gals probably don't follow hockey but today was such a thrilling day for me that I have to make you endure, just for a little bit. :)

This is me all ready to go: 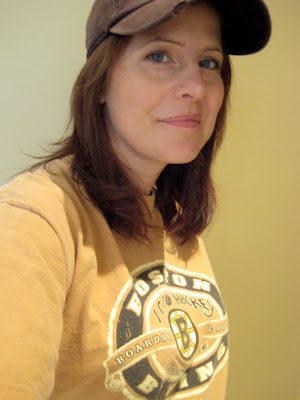 My favourite hockey team (Boston Bruins) won the big trophy this year (The Stanley Cup, named after Lord Stanley - what heritage, lol) and one of the players hails from Welland which is just the next town over. So yesterday they had a big do, named it Daniel Paille Day (that's the name of the player), and got us to put on Bruins jerseys and shirts in 80-degree weather.

It was packed and we got there a good 90 minutes early.  I think this guy was a fan: 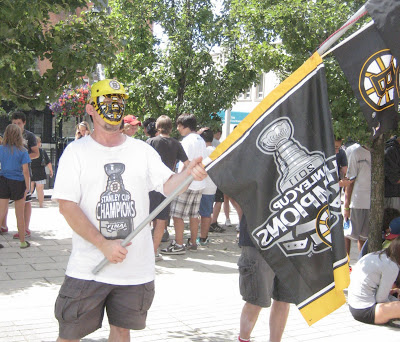 I got a lot of shots that look like this, lol: 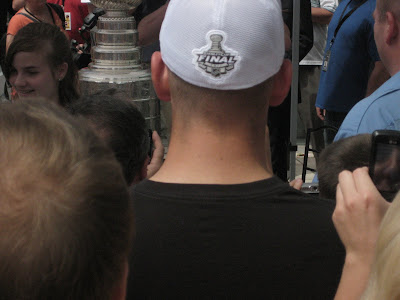 But eventually I passed my camera up to the tall fellow in the white hat and got this shot of Daniel Paille and Lord Stanley's Cup: 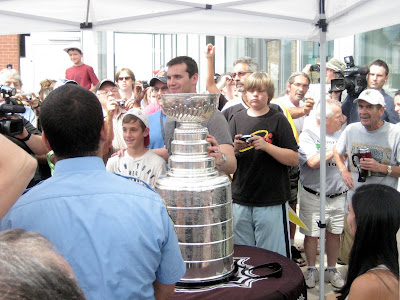 And as he was leaving, this one: 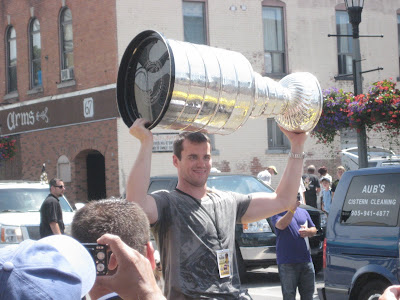 I promise I won't be doing weekly hockey posts or anything crazy like that gals.  Thanks for hanging in there, and I promise that tomorrow we'll be back to crafting and the like.  :)  (Go Bruins!)

You definitely look like a fan!! and if you love hockey as much as we southerns love our college football I totally understand :) Thanks for linking up to the photography challenge!

I'm a canadian living in the south so I won't comment on the Stanely cup play offs LOL. But your pic is super cute :)

I totally get your hockey love, Terry! I'm a long time Montreal Canadiens fan - note the francophone spelling :), even though their record has been less than stellar, ahem...

The Bruins goalie was so incredible during the playoffs that at one point I was convinced he must have made a deal with the devil!

How fun!! I will have to tell my SIL she is a huge hockey fan, mostly a NJ Devils fan. I think she would have fits to see the cup so close!! We even took her(and the three oldest kiddos) to see the Dallas Stars play last season. (No they didn't play the Devils) It was fun.... but I have to say, I would still rather sit thought a basketball game.