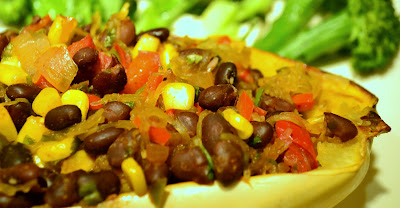 I found the Spicy Spaghetti Squash on the Whole Foods site.  Somewhat surprisingly, I believe I made it as written.  That might be a first.  :)

I cut the squash in half and put it face down on a greased tin-foil-covered cooking sheet and then roasted it in the oven for about 50 minutes.  Apparently that tired me right out, because then I was too wiped to remove that label.  Classy. 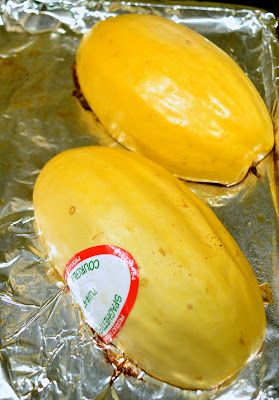 While the squash was cooking, I threw the stuffing ingredients into a pan (frozen corn, jalapeno, red peppers, black beans, onion) and sauteed until softened. 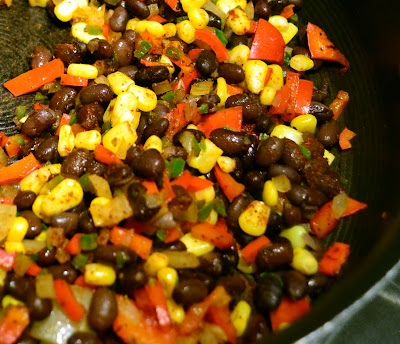 When the squash was tender and cool enough to sort of handle, I used a fork to scrape out the spaghetti-like tendrils, and added that into the pan as well. 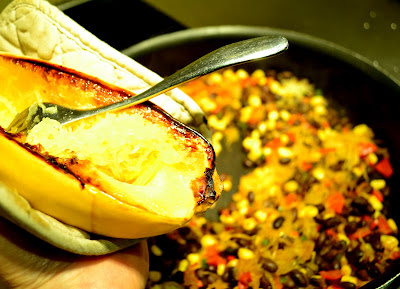 A little chili powder, fresh cilantro and lime juice to finish it off. 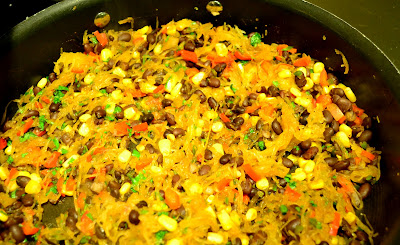 Now all that was left to do was stuff it back into the squash shell for eating and pretty presentation. 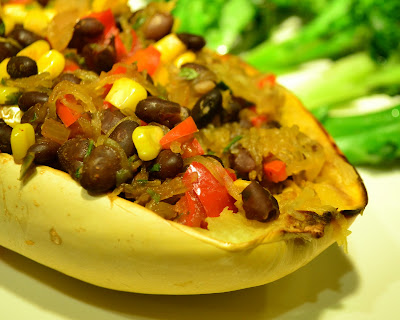 If you're a cheese fan (who isn't), it would be even more awesome with some spicy havarti or pepper jack grated over top and then popped under the broiler.  Mmmmm,...cheese.

I'm pretty sure my sister uses that same recipe when she makes that. It is so good!

This looks so yummy!! I love all of the veggies you used! What do you think about adding ground beef to it??

This looks delicious Terry! I love squash..thanks for posting!

Ha - you and Lindsay (Delighted Momma) must be on the same wavelength. Did you see my spaghetti squash story I shared in her comments? I made it once. Have yet to try again.
This looks pretty durn good. Minus the corn. Ya know, my corn niblet issue. Put it on the side and I'll tear it up. :o)

I love squash...I've still never had spaghetti squash, but I need to!

Best Pasta substitute ever! Cheese would definatly make this dish a disaster of yummyness... hitting my mouth..