Don't forget to head over to One Artsy Mama to enter her 9 (yes, I said 9!) amazing giveaways.  You can still get your name in until Sunday, September 25, 2011.

Italian plums are the purple oval ones that sometimes end up as prunes.  I'm not a big prune fan, but I must admit that I do like the plums.  Our awesome neighbours brought over a big basket of them for us but it was more than we could eat, so I searched for a recipe to can them.

I've never canned before so this was going to be a double-duty project:  learn how to can and save those plums. Sweet.  Literally.

For starters, I found an interesting-sounding recipe for spiced plums in port.  We have an incredible surplus of port in our house as the result of my husband searching for "that port he had at that place that time."  There were a lot of no-gos.   Anyway, port and plums -- sounded yummy to me.  You can find the recipe here, but basically it is plums, sugar, and spices.  The smell in the house was insanely delicious while this was cooking.  Seriously.

I started by pitting and halving the plums.  The pits came out very easily. 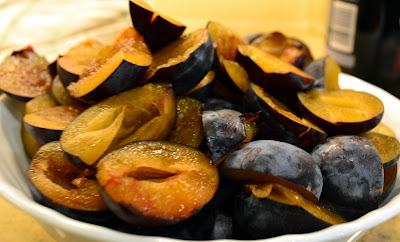 In a saucepan, I combined the water, sugar, and spices and let it come to a boil. 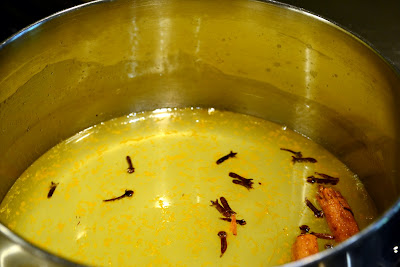 Then I added the plums and let them cook for a few minutes. 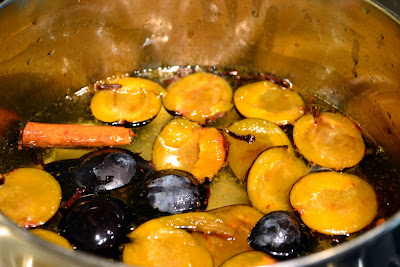 After that the plums found their home in the jars (I popped them in the dishwasher to make sure they were sterile) (the jars, not the plums) and boiled the lids (though I read later you should only use hot water, not boiling).

The jars were filled with the plums, then I poured the sauce in.  To get out the air bubbles, I used a long metal skewer.  When you do this, don't get too rambunctious or you'll end up making more bubbles than you get rid of.  Not that I did that or anything.  Sorry, no pics of that part.  I was totally concentrating.

Once they were filled, I wiped the rims and hand tightened the tops. 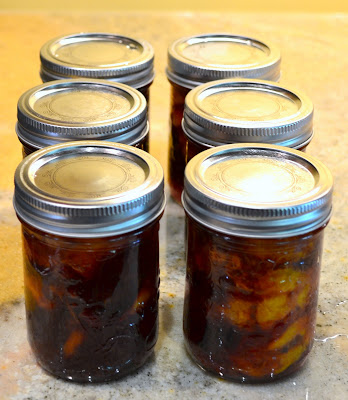 Then into the water bath. 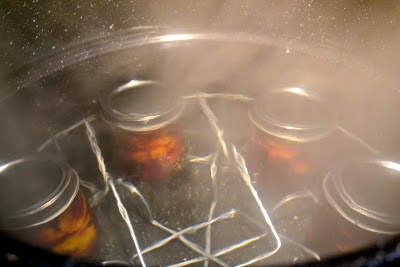 Once the water came back up to a boil, the timer started for 20 minutes. 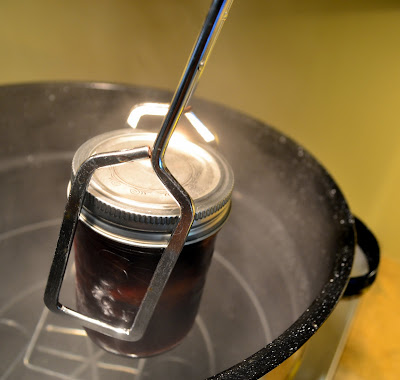 So after 20  minutes I used these barbecue tongs to remove the jars.  It wasn't easy.  They kept sliding and I nearly dropped them a hundred times.  We all know my burn record so I was nervous to say the least.  I finally get them all out, only to discover: 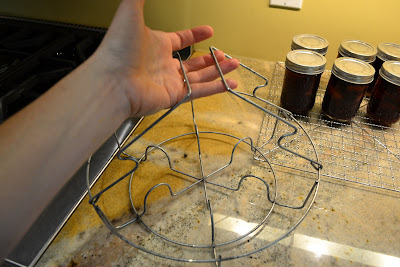 Yep, there are little handle thingees on that metal part so you can easily grab that and pull it out of the boiling water.  Who knew? 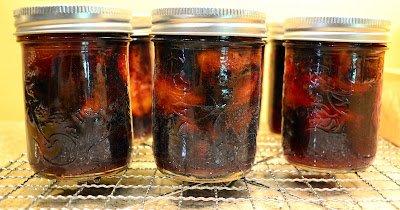 The recipe said to let them sit and cool for 24 hours.  I put them on this cooling rack so the bottoms would cool too.  As they were sitting there, I heard these popping sounds.  I had to Google - was that a good thing or a bad thing?  Turns out it's a good thing (you probably already knew that).

There was some leftover syrup that didn't make it into the jars.  I had this last night over plain yogurt and it was awesome.  Sweet, but not overly so and you could definitely taste the plums.  If it's any indication as to how fabulous the plums are going to taste, I'm pretty excited.

This is where I'm partying:

Email ThisBlogThis!Share to TwitterShare to FacebookShare to Pinterest
Labels: food, home and garden

I don't drink but this sound great!! I'm sure the smell was outstanding!! Great job on your first canning adventure! I used to help my mom can all the time but I have never tried to on my own. Maybe if I get enough out of the garden one year.....

Terry!!! your site looks soo great!! I love it! The peas are adorable!!

Noooooo!!!!!! I'm sooo jealous!!! I've been trying to find some and NO one sells them. I had a tree in a rental house years ago. If you have any left, I'll send you a recipe for the best Italian plum dessert EVER.