I'm getting serious about picture taking, folks.  Damn serious.  See, I just swore about it - that's how serious I'm getting.  First off, anyone who has stopped to listen has heard me bad mouth my point and shoot camera (not because it's a point and shoot camera, but because it is taking crap pictures - nothing to do with me of course) and plans are in the works for a birthday gift of a decent camera.  So,....

Along with the new camera to be (don't get too excited about that,..we're still a few weeks or months away - we'll see),...but, along with the new camera, I thought I would pay more attention to lighting. I tried to make a light box a few months ago.  It was the kind that you cut out of a box, then put tissue paper on the sides and top, and construction paper inside.  Well, it was crappier than the camera.  Seriously.  And if I forgot to put it in the closet, I would inevitably find a cat asleep inside of it.  Nice. 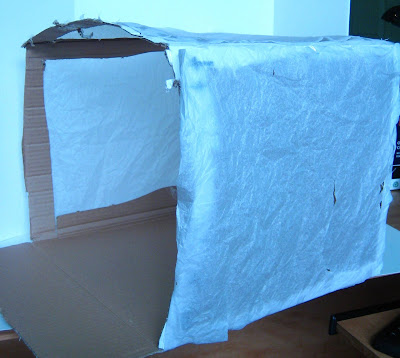 You can see where a cat has pushed through the side near the back.  I wish I could somehow blame him for the crooked cutting as well, but I think we all know that was me.

So, I tried something else.  I went to Wal-Mart, slapped down my $6, and brought home a tri-fold foam core board.  I kept the poster board paper for the bottom, and now I have a light box that actually works.  The ironic thing is that in order to take a photo of the light box with the camera on its recently found tripod (I told you I was getting serious, kids), I had to use my iphone to take the photo.  Ha ha ha,..talk about a crappy picture.  Oh well, you get the idea. 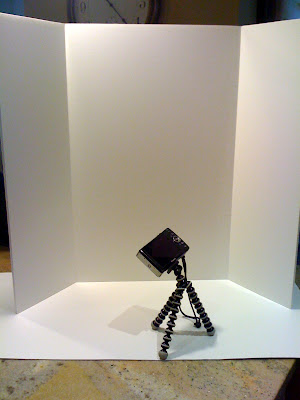 Already I noticed a big difference in my pictures.  The chicken piccata from last week came out so much better than any food photo I've taken before.  Part of that is the all white background, but the other part is that the light is directed toward the plate. 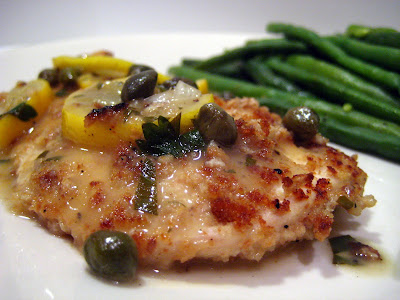 Loving it!! And it was super easy, and super cheap.  Easy and cheap - what could be better than that?

Great idea! I love photos taken with a white background. I may borrow this idea from you. Thanks! Susie

Oh great, just what I need. Another thing to obsess about. Clearly I will need to be stealing this idea.

This is great Terry!! I have been wanting to make a light box but, couldn't think how to make one that I could keep kiddos out of! :) Yours you can just fold up and put away! I am so stealing this! I did notice how great your photos of your chicken piccata turned out!

That is a really good picture of your chicken dish! I try to take my pictures outside using a piece of bristol board as a background. Have you found that you can use your lightbox inside and not use your flash?

Great idea for a light box! I have been trying to improve my photos too.
Traci

Very nice Terry- you are getting serious about this. It is amazing what a difference it makes.
Chicken piccata is a family favorite around here :)

Okay, now I know, you're just brilliant! What a great idea! And to think, I walk pass those boards almost everyday at Hobby Lobby. Who am I kidding, I probably have tons of them in the attic from Science Fair Projects!

Great idea and it makes your food look great, like I know it is! Debbie

Hi Terry-
Great idea! I'll have to try that!
-Lynn

OMG, Terry swore! LOL Well, I must say that you are taking some darn good photos now. Thanks for making me hungry.

I tried that a while back and didn't have much luck. I think I was positioning the board wrong. Will have to try it again.

Very clever! I might have to try this. Food pictures are so tricky, but your chicken looks quite tasty.

This is great! I could really use this for my photos. Thanks for the tip!

I just found your blog from Ann from Sutton place. I so need the photos tips - and I can't wait to put them to use. I am now following so I do not miss any of your tips. Thanks!