This morning I finally got tired of looking at my grey hair poking through, cracked open a box of "Natural Light Ash Brown" and went at it.  The doorbell rang.  I stared at the dye all around my hairline and my hair standing up at a completely unnatural angle and knew I was going to have to answer that door.

We live in the country and when our doorbell rings, it's usually for a good reason:  the neighbour is locked out of her house and needs the key that we keep for her; the family up the street is returning our dog who escaped the yard while I was in the shower; or the guy passing by noticed that there was a coyote on our lawn and maybe we want to bring in the cat.  Stuff like that means I really should answer the door.

Today was no exception.  We've been waiting since the wind storm on Thursday for someone to come around and look at our roof so they we can get an estimate on repairing the shingles, and that's who was here. 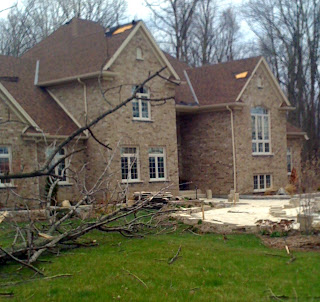 The fellow who came was young, early 20s maybe.  When he saw me he was polite enough, but I could tell that it had registered with him that something was odd about my head.  He excused himself to poke around the roof and get the information he needed to do an estimate for us.

As you know, once you start the dying process, you can't stop.  So I continued slapping that dye on;  some of it hitting my hair and some of it hitting my skin (yeah, I'm a super messy hair dyer).  The doorbell rang again.  I grabbed a tissue to try to remove some of the dye on my face but it didn't do much more than move it around.  I grabbed a clip and smoothed my hair as best I could but I still looked like the bride of Frankenstein.  Ah well, no fixing it now.

So I went to the door, still in my pajamas, holding a big dog back in each hand, and sporting an even weirder-looking hairdo.  I wish I had a picture of that poor guy's face.  His horror-filled eyes couldn't have gotten any wider,  and he actually took a step away from me when he got a good look at my head.  He practically threw the quote at me and ran down the driveway.

I am picturing him sitting at home in a corner, rocking back and forth and drooling.  I hope I didn't permanently scar him.  Poor kid.

Now I am going to implement the buddy system for hair dying.  I promise not to dye my hair unless there is someone else at home who is able to answer the door.  The dogs don't count.

I totally enjoyed reading this post, Terry! Honestly I laughed out loud it was so funny! The image of this young guy stepping back from you is hysterical. It's great that you have a sense of humour about this situation! Most importantly, how does your hair look? BTW, I love your house and property!

Ha!!! My mom always makes my sister be her hair dye buddy...I don't have the patience for it. ;) Thanks for the visit!

This post had me rolling on the floor. I too dye my own hair at home but now I will live in fear that someone will ring the door bell and I will have answer with my hair standing on end.
Thanks for the good laugh.
Traci