I want to sew.  I try to sew.  But I don't really sew.  Today was the perfect example of that.

I wanted to make a tote and I had a great tutorial all set.  The problems started when I reached for the fabric.  I accidentally grabbed an old pair of jeans and thought, serendipity, I'll make a little tote out of these bell bottom jeans.  How hard could that be? Those are often my famous last words.  How hard could it be, indeed.

I started with a basic idea of what I wanted.  Simple tote with two handles and two pockets embellished with ric rac.  Here is the preliminary layout.  Sure looks easy enough, doesn't it. 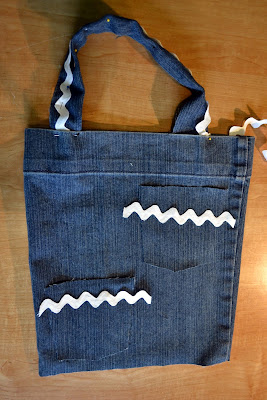 So, I started with the handles because I thought they would be the most annoying and I wanted to get them out of the way.  All I did was take two pieces of denim, put them right side together, and sew each side of the long ends.   I trimmed up the excess, and then I did it again.  I made the handles 14 inches long and I honestly just eyeballed the width, looks like about 1-1/2 inches wide. 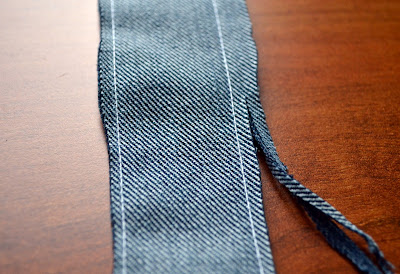 I then turned each handle right-side out which took a significant amount of time.  The first one I just tried to stuff my finger through which didn't work very well, but eventually did the trick.  For the second one, I thought I would get smart and put a needle and thread at the one end.  Then I fed the needle through the tube, backwards so it wouldn't snag (see, look how smart I am) until it reached the end.

This was the big moment.  I pulled with the anticipation of brilliance only to have the thread snap.  Uh-huh.  In that brief moment, I was launched right back into the finger stuffing method, and yes, I definitely did feel like a loser (in case you were wondering).

When I got them turned right, I sewed on the ric rac. 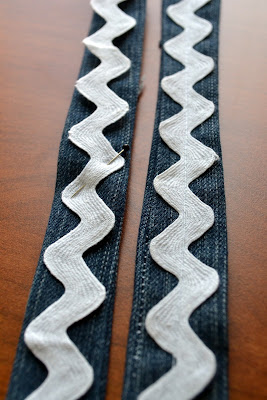 At the ends of each handle, I turned the end up the wrong way about a quarter inch and sewed.  I didn't get this right the first time.  It looks wrong, in fact, when it is done correctly.  The reason is that the ugly side will be sewn to the inside of the tote so that the clean edge will then face outward. 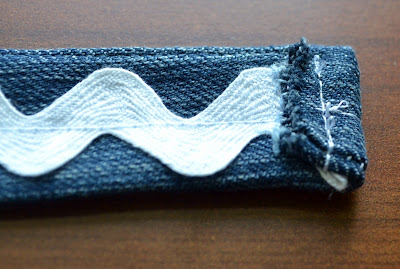 See how this looks messy?  This was the first attempt where I did it wrong. 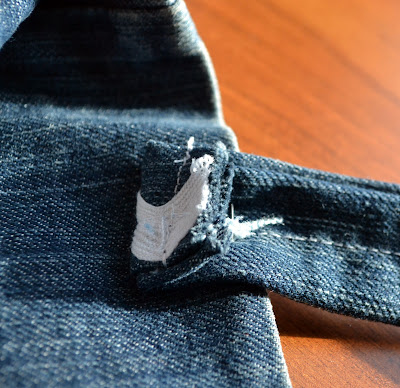 See how this looks so much neater (with the ugly side buried)?  Too bad I didn't get it right the first time.  :) 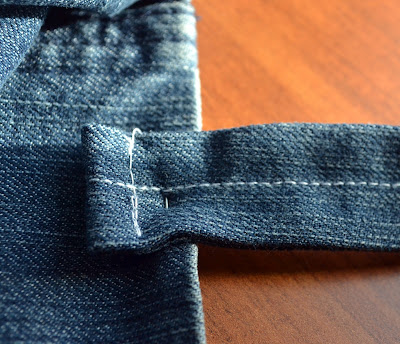 At first, I wanted to do one of those fancy squares with an 'x' in the middle to attach the handles, sort of the like the photo below only my vision was much neater.  I had no idea that it was so difficult to line up stitches, (to be fair, it probably isn't that difficult for most people, just me).  In the end, I ripped out those ugly squared x's and just did some straight lines.  That should be my guidance for future projects - just do straight lines. 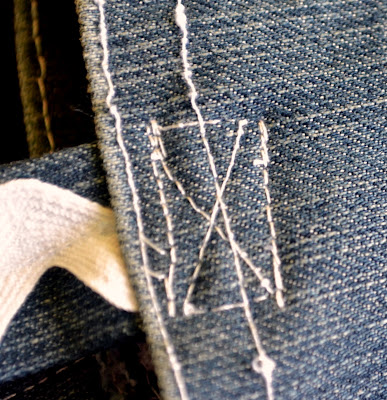 Then I moved onto the pockets.  These were basically squares but with a wider top edge.  I turned the edge under and sewed around all four sides, as well as sewing on a stripe of ric rac.  Then I sewed each pocket on to the front of the tote. 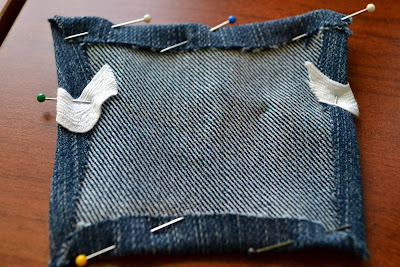 I did them both on a slight diagonal so that you can't tell that I am too spastic to sew straight or line anything up  to add a little interest to the front of the tote.  This was surprisingly difficult because the pant leg was a tube and it was really hard to get the tube in a position where I could sew these pockets.

I can't tell you how many times I jabbed myself with those pins.  Seriously, I was starting to worry about the blood loss. 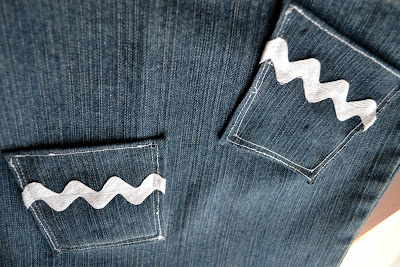 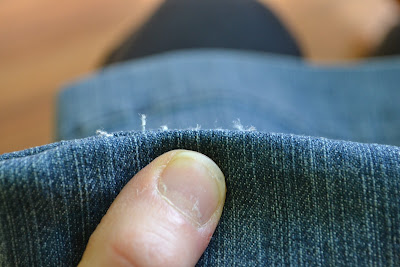 At the end of this project, I have to admit that the skills I most used today were:  ripping out stitches and cursing.  I don't really need to hone my cursing skills, but if I did, today was effective. 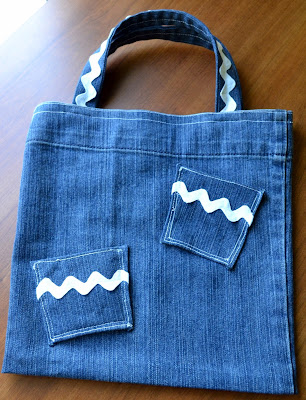 I do like how it turned out and plan to put my current crocheting project in it, but I'll have to move quickly.  There were thieves afoot at our house. 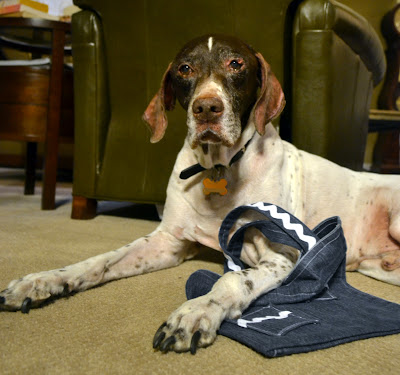 When I peeled that tote away from Danny, Moe got into the act. 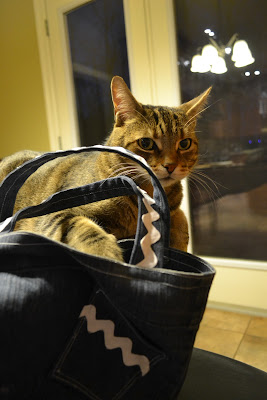 And even Pete fell in love with it. 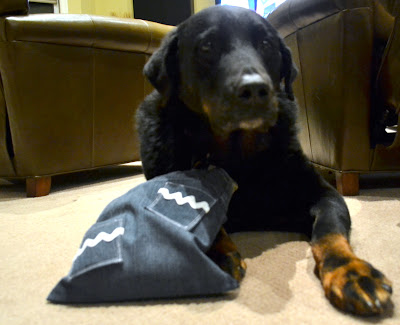 I might have to make another one for myself.  I wonder if I could survive it.

This is where I'm partying:
Thriving on Thursday (Domesblissity)
What We Wore and Made Wednesday (Rae Gun Wear)
Link It Up Wednesday (Junk In Their Trunk)
It's a Party (A Creative Princess)
Taking Timeout Thursday (Mom On Timeout)
Super Sweet Thursday Par-tay (Fabulously Flawed)
Freestyle Friday (Happy Hour Projects)
Flaunt It Friday (Chic on a Shoestring)
Frugal Friday (Shabby Nest)
Shine on Friday (One Artsy Mama)

You've done a great job on your first tote, Terry!!! My most used sewing gadget is my unpicker and cursing, well, that always helps. I certainly don't get things right the first time. Denim handles are hard to turn. You can try a safety pin to pull it through. Love the ric rac on the denim and the offset pockets.

Look at you go, girl! Jeans are hard to sew with, they're so thick. I'm so proud of you, it looks great! Sometimes the more I cuss, the better it turns out! I think I scare it into just finally doing what I want it to!

"At the end of this project, I have to admit that the skills I most used today were: ripping out stitches and cursing. I don't really need to hone my cursing skills, but if I did, today was effective."

Best. Post. Ever. I am almost crying over here. I have these sorts of adventures all the time, yet I never read about anyone else doing it. I have been known to sit on the couch and take an ice cream break from time to time, even!

I hate turning straps too. I usually pin a big safety pin on mine and feed it through, but I've had them break too! Wider is better, and even better are these tube turners my friend just told me I MUST invest in: http://www.amazon.com/Dritz-796-Quick-Turn/dp/B003LGZCZ8/ref=sr_1_4?ie=UTF8&qid=1328713433&sr=8-4

I'm so glad you ended up with a SUPER cute, upcycled end result at the end of all that cursing. And it looks like everyone in your house will agree that it's a great tote!

Excuse me while I laugh at you for a minute............ I think anyone that sews has honed their cursing skills into a fine art. You know how much I use my seam ripper, I curse just as much.;) Denim is a pain in the a** to work with!
Your finished to tote is fantastic! I LOVE the ric-rac. Great job I bet you get a ton of use out of it.

I know that no one has ever told you this before so allow me to be the first:
You're so funny.

And your post is me all over when sewing, lol I'm always stabbing myself with pins, working the good ol' seam ripper, cursing, etc...lol

It's an awesome idea to use old jeans to make the tote! :) I've seen little bags made from the tops of old jeans too...it really works well for those that have got lots of embellishments!

Hahaha, this is funny story becouse a looot of us is on that stage of sewing. Well, I am. It was like that I'm reading about mine project :) BUT, I don't give up. I belive that you won't either. Tote turned out perfect!

Well they all wanted to be seen with that cute bag! :)

Your concept of 'not sewing' is very different from mine! When I say I can't sew, I mean, I don't even know how to turn on a machine, or put the thread in, or figure out how to cut it! I'm so envious of your talent! (Although I could out-curse you anyday!)

I'm mailing your V-Day gift tomorrow and I hope it gets there on time!

LOL - funny! I have never even turned my sewing machine on! Glad it came out so cute. Love seeing your pets - all adorable!

I like it! Turning handles is brutal - I even have a tool ESPECIALLY for that and it only works sometimes . . . oh well, worth the effort, right?

Good on you Terry. It looks great. Can't beat a tote made from denim. I love your models! So cute. Thanks for linking up with Thriving on Thursdays. Hope to see you again soon.

I think you did great and I'm proud of you for trying :) I don't sew and I wouldn't have the guts to try to sew a tote ;) Happy Valentine's Day! Thanks for sharing at Taking A Timeout Thursday!

LOL! That was so wow.So creative :) I love everything to do with jeans!! It's so sophisticated right!! Love LOVE it :D..

Your new follower on GFC ;)hope ur dancing ;)

Denim is a real pain to turn. For my handles I cut a strip about 6" wide. I fold and press in half lengthways, then press the sides in to the middle, fold in half again and stitch down each side about 1/4" in. Thanks for making me smile with your description of making your bag!