There are a bunch of awesome gals doing a "2011 Review Extravaganza" and I thought it would be fun to play along.  I am a little late to the party so I combined the first 6 months into one post.

It seems so far away now, but I started this blog in February of 2011.  I was looking back to see what happened from February to March and boy was I surprised.  I can't believe that I had any followers at all in the beginning.  My projects were so,....so,....well, you remember when you started so you know what I mean.  (in my case, it just wasn't pretty.)  Plus, my photos were all really dark.  What a newbie, lol!

Even so, here are my favourite projects from the first part of 2011:


FEBRUARY
In the beginning, I forgot to take photos BEFORE biting in the toast.  :)
MARCH
This is Edgar.  He started off with a broken neck and a bright green hue to him.  I fixed his neck and gave him an antique white paint job and now he is very happily occupying a corner in our bathroom.


This is the simplest little project - making a box out of paper and adding some paper rosettes to the top.  I couldn't believe how popular this project was/is because it was just so easy.  I wonder if it was the styling of the photo?  :)

APRIL
Remember when everybody was making book page wreaths? Doesn't that seem so yesterday now, lol.

MAY
This is one of my favourite projects and it was so easy to make.

JUNE
This is one of my better jewelry attempts.


Head on over to check out the other fabulous entries or to participate yourself: 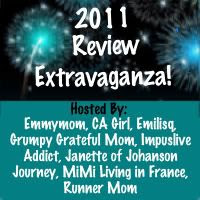 Wow, they're all great! I think the bites out of the toast is adorable!

Aw, what a great idea! And I'm with Terri - it just shows that it's delicious, LOL!

What a fun idea!! The book page wreath is the first post I saw of yours.:) It seems so long ago. Great projects you picked. Edgar is one of my favorites too.:)

Oooh, this is a great idea.
It's perfect for right now when I don't have any brain power left to write a spontaneous and well thought out post. Ok, that sounded like I was saying this isn't well thought out on your part. Totally not saying that.
Can I dig myself out of this hole by saying that I adore your nest necklaces? Because I do.

You have some amazing crafts posted and the pictures don't look too dark-- you sure are talented!! I love the decor box!! Awesome!!

Man, you are so creative!

Oh love loving your crafts! Definitely going to be clicking the links to go see how you did them.
So glad you are joining in now! And perfect way to do your post. Look forward to your post next week. I am your newest follower and I have your point recorded for this week :)

What a fun idea!
Doesn't February seem like ages ago!? I started mine in March and it feels like I've been in blogland forever now.
And yes, going back to look at those first posts is pretty funny. My very first post was just a picture of a sandwich. lol

I love your box with the rosettes. I added that to my favorites for later. And your jewelry is gorgeous.

Looking back, I had a rough first couple of months with blogging too.
Your bitten toast made me laugh, though that meal does look delicious!

I remember Edgar! I can't believe it's been almost a year of blogging (for both of us). It popped out to me that you actually eat the crusts of your toast, which is very grown-up of you!