I have literally been waiting three months to share this with you.  On December 4th, I put a bunch of lemon and orange rinds in a plastic juice jar with some brown sugar and water.  Three months of daily shaking later, and we have a cleaner. 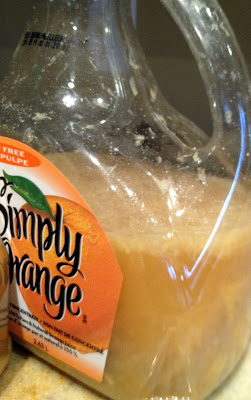 I got the recipe at Happy Homemaker 88. The hardest part is waiting the 3 months for the citrus to ferment.

I strained the remaining chunks of peel and was left with a concentrated cleaner.  I filled a spray bottle with a little bit (1 part) and filled the rest with water (10 parts) and got to spraying.

The oven door was covered in spots that hadn't come off with a quick vinegar and water wipe.  It took 2 sprays with the orange cleaner, but the door was sparkling afterwards without a lot of elbow grease.


In the last year, I seem to have developed an allergy to regular laundry detergent, so I have been spending the equivalent of gold bars on a 'free' laundry detergent that has no dyes or scents.  It has helped a lot, but it's expensive, so when I read that this orange enzyme could be used for laundry, I thought I would give it a try.

I used it on a strawberry juice stained tea towel and am fairly happy with the results. I didn't pretreat or soak the stain (which of course I normally would - I was just so excited to try this out).  Instead, I just doused the area with the enzyme and put 1/4 cup in with the load. 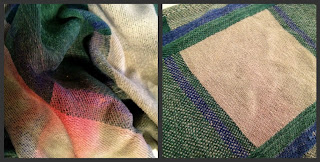 You can still see a slight hint of the stain, but without letting the enzyme soak in at the pretreatment step, I think that this can be considered a success.  At the very least, this showed me that the enzyme was in fact cleaning the fabric. Also, I know I don't have an orange allergy so breaking out into a rash isn't going to be a problem. So woohoo, what a money-saver this could turn out to be.

I used the diluted spray-bottle version to clean the countertops, the chrome faucets, the stainless appliances, a couple of windows, the toilet and a drool spot on the carpet (the dog's drool, not mine - honest).  It worked great on all of those and even left a nice orangey smell on the carpet (which can seriously use a bit of help in the odour department). 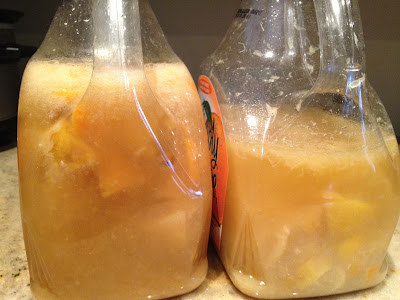 I am definitely going to be making more of this stuff.  It's super cheap, it makes me feel good to recycle my lemon and orange peels, and it works great.

Has anyone else tried a natural cleaner like this? How did it work for you?

Someone asked a great question - how does fermenting make this a cleaner.  I should have addressed that initially.  Here is an explanation from eHow.com:

"An enzyme cleaner contains proteins that are produced by bacteria that can clean up oily spills by breaking down the oils, as well as clean up pet urine smells by essentially eating the bacteria that produces the smell."

What a great idea! I never gave natural recipes a lot of thought before... until I now have someone bound to come along with their hands in the carpet and their gums on the edge of the table. ;P Knowing the cleaner isn't going to be worse for her than the gunk I clean up is reassuring.

But, three months... I dunno if I can wait that long!!

I was all set to say I would never have the patience to wait 3 whole months, but once I saw the results on your oven door, I have to say, I'm rethinking. Just might give this a try.

Wow...I've got to try this. Thanks so much for sharing! :D

I bet it smells so good! And is a heck of a lot cheaper. I hate when we have to buy cleaning products...so spendy.
My mom has been making her own laundry detergent and she's loving it. Gonna have to tell her about this.
And. Yeah right it wasn't your drool.
And again...you have a blue stove??? Awesome.

Wow, I am totally impressed!! I LOVE the results on your oven door. I was just thinking I need to make my own stain remover. Now I know how. Three months though. That is a long time!!! I am excited to give it a go though.

You had me at oven door. I'm so going to make and try it! You're right though, waiting 3 months is going to be hard!

I love natural recipes, Terry. Thanks for sharing. The waiting would kill me though. I'm a tad impatient.

You have been tagged a Wonderful Blogger, come see what to do next http://californiahomedreaming.blogspot.com/2012/03/wonderful-blogger-tag.html

I LOVE this idea! I haven't even though about this recipe. I really want to try this out. And from the sounds of it, it really does work. :D